The busy life of a book adventurer 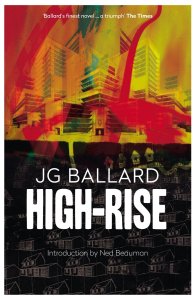 Pages: 170 (minus the introduction and an interview at the end)

In this visionary tale of urban disillusionment society slips into a violent reverse as the isolated inhabitants of the high-rise, driven by primal urges, recreate a dystopian world ruled by the laws of the jungle.

Since this is my first review on my shiny new blog, I thought I’d begin with one of my favourite books. I only read it for the first time last year when I was introduced to it by one of my university tutors and I absolutely fell in love with it, and I could read this again and again. Not that this is a comforting read by any stretch of the imagination. The typical Ballardian novel is chilling, gritty and stayed with me for a long time after I’d put it back on the bookshelf.

High-Rise takes place in a modern, luxury high-rise tower block in which the tenants are intelligent and wealthy, and are inhabited by the middle and upper classes of society. Yet these are further divided by their classes: the wealthy, social elite top the building , the socially mobile occupy the middle floors, whilst the lower middle classes are crammed into the bottom floors. The novel focuses on three men from each of these sub-classes and documents their journeys from respectable members of society to animalistic beings driven by their primal urges. This slippery slope of regression begins with irritation at their neighbours’ thoughtlessness and the failings of the building’s facilities and rapidly descends into a breakdown of order where unspoken societal rules are completely thrown out.

Ballard’s writing style is just fantastic: being able to fill such a short novel with such vivid and nightmarish images is no mean feat. I could feel the panic, the blood lust and the violence within myself, I could almost smell the rotting garbage blocking every corridor and hallway, I could feel the grime and the blood on my skin. I struggled to get out of my head the image of Anthony Royal, the architect of the tower block, standing on top of his creation with his trusty hound at his side and the swarming birds circling around him. I know that others who have read this book feel that it drags on but I have to disagree. The pace to me felt quite rapid but, far from being rushed, it felt like experiencing a nightmare.

I was particularly interested in the paradox that Ballard presents with High-Rise which is that the more the building becomes the tenants’ prison, the happier they become. It’s almost as if their physical freedom has to be given up for them to be free of social constraints, and it made me question whether or not the residents considered their new order a utopian one. (If anyone is interested, I wrote a 5,000 word essay for university on this novel entitled ‘J.G. Ballard’s ‘Voluntary Prisoners’: Dystopian Architecture and Space in ‘High-Rise’ and ‘The Enormous Space’’ which explores this utopian/dystopian balance, Ballard’s fascination with modern architecture and how he believes the two intertwine.)

In this novel (and indeed in his others), Ballard has mastered the art of making humans, us, seem as alien as creatures from another world or another time. This is definitely a science fiction novel that is far from the norm.